Training methods over time have evolved and devolved based on local traditions passed within the horse training community. Some traditions are passed between generations, with little proof of effectiveness or concern for the well-being of the horse. Fortunately, within the horse training community in the United States and Europe, the trend is to consider the well-being of the horse during training, and to use techniques that, while not necessarily based on scientifically sound evidence, at least result in a tractable and usable riding horse.

A very common technique originating in cultures around the world is to cause a state of learned helplessness in the animal where it literally “gives up” any attempt at reacting with flight or fight as its natural response. This technique can take place in a round-pen or in a natural setting where the trainer literally exhausts the animal through continuous pressure until it can run no more. As the horse “gives up,” the trainer is able to overcome the natural instincts of the horse, and perform miraculous feats of training. What was a dangerous untrained wild animal, now stands quietly as the trainer approaches and makes physical contact.

The round pen is an important tool for good ground training, teaching verbal command skills, and basic pressure-relief techniques, and also provides a safer environment for early riding of the horse in training. But when used as a tool to cause learned helplessness, it is a shortcut that may get results quickly but at the expense of the horse's wellbeing. Running the horse under pressure using a whip to a point of exhaustion should never be a part of any training activity. This practice teaches the horse to fear the trainer and to submit. Alternatively, properly desensitising the horse, and reinforcing its proper behavior using less drastic techniques results in a quicker and overall lasting benifit to the animal.

Another technique employed by many trainers is the practice of bitting. With this technique, the horse is fitted with a bit, and the reins are tied to the cinch or saddle such that relief is only obtained when the horse flexes its neck and hold his head in the position that is considered “correct” by the trainer. Eventually, the horse learns that relief is only obtained by conforming to the design of the trainer, regardless of what is physiologically correct regard head carriage for the particular animal or the needs of the sport. This is also a learned helplessness that can be arbitrarily applied and that is considerate of trends in training, but not by any means based on science of performance or service.

Trainers that use bitting as a short-cut in training essentially are fooling themselves (or their novice clients) by believing that the resulting head carriage enhances the performance of the animal. Certainly horses that have been properly trained and have the physical strength to shift weight to the hind quarters for better collection all adopt a more vertical face and rounded crest, but this is entirely different to the horse that holds its face and head in a particular position as a result of bitting. The bitted horse may look more correct, but artificial “looks” should not be the goal of the horse trainer.

Both of these techniques result in learned helplessness, and are contrary to the well-being of the horse. They are, however, considered practical and efficient training techniques by the majority of horse trainers. Winners of popular colt starting competitions are experts in accelerating a state of learned helplessness as they dominate young untrained animals. The results are amazing over the short term. Indeed, these animals with additional traditional training often lead to wonderful riding and competition horses, but is the practice justified over other, perhaps slower but more humane, methods of horse training.

A Better and Safer Way

The most humane method of training horses makes use of science based techniques that recognize the ability and nature of the equine. Horses learn in a manner that is highly predictable and relatively simple to understand. Equine scientists have outlined 8 concepts that guide trainers in developing a process that is effective, quick and long lasting.

1.  Understand and use learning theory appropriately

Learning theory for equines recognizes the natural instincts, mental capabilities, and how the animal naturally adapts to its changing environment. The theory recognizes a conditioned response through the use of both positive and negative reinforcements that become associated with a desired behavior.

In the context of learning theory, a positive reinforcement is one in which an action is added or given when the proper response is received. Examples of positive reinforcement are the use of a calming voice of praise and a neck rub after a correct stop, or a treat after standing still for a mount, or an opportunity to relax between exercises in a training situation.

Positive and negative reinforcements are the fundamental tools of training in learning theory. They are not good or bad, but they are easily understood and even used by horses in nature. One important concept that truly separates the good trainers from the bad is the use of timing. How quickly a reinforcement is applied or removed in relation to the proper response is fundamental to the horse acquiring the conditioned response. Beyond timing, the magnitude of force used in negative reinforcements should be “just enough” to elicit the response. Great horses and horse trainers communicate with the trainer in ways almost magical for the observer. Extreme lightness and immediate response is the goal.

2.  Avoid confusion by using training signals that are easy to discriminate

Learning theory tells us that clearly indicating what we are asking of the horse must be communicated. Fortunately, this concept is well understood by horse trainers historically.

Much of the gear that is used while riding is designed to provide clear cut communication of what we are asking of the horse. The use of bits and spurs provides much clearer communication when used by a skilled trainer. These same tools can be overused or even abusive, but not by the skilled trainer who understands that lightness and responsiveness result from lightness of aids. Learning theory tells us the training signals should be easy to discriminate. This leads us into the third concept.

3.  Avoid confusion by training and shaping responses one at a time

Horses learn better when they are asked to do one thing at a time.  When the trainer separates even seemingly simple tasks, the horse is less frustrated and better conditioned to provide a reliable response. For example, it is better to ask the horse first to move forward, and then to turn using two separate signals one after the other. Asking for the turn at the same time as asking for the move forward confuses the horse. As the horse becomes better trained, the time between the two signals can be reduced, but the signals should not occur at the same time for best learning.

4. Train only one response per signal

It is unfortunately common for trainers to use the same signal for different situations. This should be avoided as it interferes with the horse’s ability to learn. A common example is the use of the verbal signal “whoa” when asking for a full stop versus asking to slow down. To keep it simple for the horse, there should be two separate and distinct signals for the two activities.  Use “whoa” for example only for a full halt and perhaps a signal of “easy” for slow down. The words don’t matter but the point is to ask the horse for only one response for a given signal. This doesn’t imply that only a single signal is used when asking for a response. To most clearly communicate the desired response from a horse, we normally use multiple signals, some physical, some verbal, when asking for a behavior.

Let’s use a reining stop where the horse is conditioned to slide to a stop on a loose rein. What signals are used to perform a world class slide: The command “whoa” followed by the rider moving his legs off and forward followed by the forward release of the rein. These are but a few of the signals that are used to train and assist the horse to effectively do a sliding stop.

5.  For a habit to form effectively, a learned response must be an exact copy of the ones before

To assure that a reliable response is obtained, a habit must be reinforced through repeated conditioning until an exact performance is repeated. For example, when a signal is provided asking the horse to change gait to a lope, it must be accomplished within a repeatable number of “transition” steps. For a reining horse, asking for a lope from a standing position allows for 2 walking steps before the lope is “picked up.”

Advanced training builds these habits that reduce the stress on the horse by clear communication of what is required for a proper response.

Persistence of response , also called self-carriage, relates to when a response is elicited, the horse continues with the response without the need for continuous signals. When a horse is asked to lope, it should continue to lope even without leg pressure until asked to slow down or change gaits. This is a higher level of training that can be accomplished by skilled trainers who can time reinforcements in a way that the horse is conditioned to not change gait without signals from the rider.

Learning stops when horses become frightened or stressed. The natural tendency of a horse is to run away from stress or danger. The use of fear or pain in a training process is not only unethical, but is also counterproductive. Unfortunately, learned helplessness associated with round-penning or bitting up, or cowing an animal to force a response should never be used. These are short cuts that are all too often used by trainers.

How do you know that your training methods are being optimally used as a part of learning theory? The key is benchmarking relaxation during a training session. Horses that are relaxed are best capable of learning the subject of the lesson. Relaxation does not mean dull or inattentive. Observe the ears, they should move and pivot as signals are provided. Also, observe the tail, it should be relaxed and not switching - an indicator of stress.

Roundpen training and many other techniques are valuable to the trainer when used properly. For a young horse in training, the roundpen is an essential tool for safety, and focus. Also, training a horse for driving, or carrying a bit using a surcingle and side reins while lounging is a useful training technique. The author's opinion is that bitting-up a horse at liberty, with its head pulled out of alignment should not be done. Flexibility, lightness and responsiveness best results when working the bridle when mounted.

The reality of great contemporary horse trainers is that they innately understand and use learning theory even though their training methodology uses occasionally techniques that create learned helplessness. The unfortunate reality is that progress, especially in the early stages of training, can be accelerated using these non-optimal techniques. For all horses, it is more humane and lasting to use learning theory in a slow consistent process that allows the horse to truly learn and make habits of responses to signals provided by the trainer and rider. 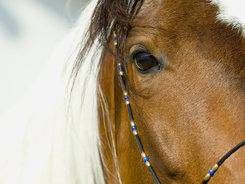 Equine Senses and How They Relate to Behavior

Is your horse eating your barn …