When an equine acts nervous, coughs, salivates with his head down, backs away from food, arches his neck and swallows repeatedly, or regurgitates with bits of watery food coming out of his nose and mouth, it is possible that an impaction is keeping food from moving through the esophagus.

This alarming condition is called "Choke", but is really an obstruction in the esophagus. The esophagus is the structure that connects the mouth to the stomach. Generally, a choke does not obstruct the wind pipe, but there is a serious danger of the horse aspirating materials into the lungs resulting from the choke

How do I help my choking horse?

First, remove all food and call your veterinarian. If possible, carefully clean out the horse's mouth. If you know it is food and can tell where the impaction is, you may try massaging the left side of the neck over the lump to help move it along.

The horse may be muzzled to prevent any further feed intake.

If there is any chance that the impaction is caused by a hard or sharp object, such as a piece of wood, a large carrot, or a corncob that might cause damage to the esophagus, it is best to wait for the veterinarian. In the meantime, you may walk the horse and allow it to lower its head.

Mineral oil should never be used when a horse is choking because of the risks associated with aspiration.

...an examination should be done to determine if any damage has been done to the esophagus, or if a tumor or stricture is causing a narrowing of the passage.

Once the veterinarian arrives, the horse may be tranquilized and a stomach tube passed gently through the esophagus to dislodge the obstruction. Medication to help the esophageal muscles relax and function more efficiently may be administered.

Once the impaction is removed, an examination should be completed to determine if any damage has been done to the esophagus, or if a tumor or stricture is causing a narrowing of the passage. If damage is apparent, the horse's diet may be restricted for several days, with plenty of clean, fresh water prescribed, followed by feeding of a soft diet.

How do I prevent further episodes of choking?

Being observant for signs of choking and taking steps to make sure that your horse is not ingesting either feed or objects that might lead to choking, will improve the horse's safety and your peace of mind.

Learn more by reading the reference article about equine choke. 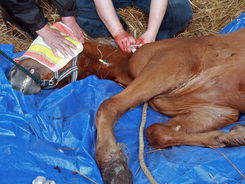 Your Bleeding Horse - What to Do

Help for the Choking Horse