The Senate Appropriations Committee has passed a Fiscal Year 2020 spending bill that includes a shocking $35 million in funding to implement a potentially catastrophic mass mustang roundup proposal promoted by the National Cattlemen’s Beef Association, the American Farm Bureau Federation, the so-called “American Mustang Foundation”and other agribusiness lobbying groups and, shockingly, the Humane Society of the United States (HSUS), the ASPCA, and Return to Freedom, a sanctuary.

A mare and foal in a BLM pen

The BLM currently spends 73% of its budget to roundup and remove horses from the public lands and zero percent of the budget to implement humane management.
© 2018 by BLM

The proposal, misleadingly dubbed a “Path Forward for Wild Horse and Burro Management,” will accelerate the removal (by helicopter roundup) of wild mustangs from public lands and allow for inhumane management methods, such as cruel surgeries to sterilize wild mares by ripping out their ovaries.

Although billed as a “non-lethal plan,” the proposal is a poorly disguised path to slaughter. It could increase the number of horses to 150,000 maintained in captivity at taxpayer expense with no guarantee of funding for their long term care.

This is a $35 million-dollar giveaway to the commercial livestock industry, which covets the public lands where wild horses roam. We’re shocked that the Senate has appropriated taxpayer funds to perpetuate a failed system of roundup wand removal when humane fiscally responsible solutions are available.”

“This scheme is the biggest threat to wild horses and burros in the West in decades, and the American taxpayer is going to finance the whole shebang” said Marty Irby, executive director at Animal Wellness Action and a lifelong horseman. “

If this ghastly plan is implemented, we'll see massive round-ups, swelling captive wild horse populations, and jubilation from cattlemen's associations that secured political cover from the Humane Society of the U.S., Humane Society Legislative Fund, and ASPCA for their long-time aspiration to secure a government-funded wild horse depopulation program."

“We might as well call this what it is: “The Path Backward” or “The Path to Extinction,” since they’re reducing wild horses to the number that existed in 1971," stated Ginger Kathrens, Director of The Cloud Foundation. “That extinction-level number is what caused Congress to unanimously pass the Wild Horse and Burro Act.

This 'plan' will rip tens of thousands of horses and burros from their dedicated land and their families at catastrophic cost to the American taxpayer…billions of dollars spent to incarcerate them in cramped corrals for the rest of their lives, except for the few that are adopted.

Why? So private livestock interests, (subsidized by the BLM through your tax dollars), can run cattle on public lands. It's time for the American people to stand up and say, 'No more. Not with my tax dollars. There are better programs to spend these billions of dollars on than this.'"

The BLM currently spends 73% of its budget to roundup and remove horses from the public lands and deal with them once removed; zero percent of the budget is spent to implement humane management of horses on the range with birth control.

Nothing in the Senate bill would prevent the BLM from spending the entire $35 million to round up and warehouse wild horses and continue the “business as usual” practices that the National Academy of Science called “expensive and unproductive for the BLM and the public it serves.”

The BLM could also use the funds to implement gruesome sterilization surgeries on wild mares in which their ovaries are ripped out in an archaic procedure used in the livestock industry.

The American Wild Horse Campaign (AWHC) is the nation’s leading wild horse protection organization, with more than 700,000 supporters and followers nationwide. AWHC is dedicated to preserving the American wild horse and burros in viable, free-roaming herds for generations to come, as part of our national heritage. In addition to advocating for protection and preservation of America’s wild herds, AWHC implements the largest wild horse fertility control program in the world through a partnership with the State of Nevada for wild horses that live in the Virginia Range near Reno.

Animal Wellness Action (AWA) is a Washington, D.C.-based 501(c)(4) organization with a mission of helping animals by promoting legal standards forbidding cruelty. We champion causes that alleviate the suffering of companion animals, farm animals, and wildlife. We advocate for policies to stop dogfighting and cockfighting and other forms of malicious cruelty and to confront factory farming and other systemic forms of animal exploitation. To prevent cruelty, we promote enacting good public policies and we work to enforce those policies. To enact good laws, we must elect good lawmakers, and that’s why we remind voters which candidates care about our issues and which ones don’t. We believe helping animals helps us all.

The Cloud Foundation (TCF) is a Colorado 501(c)3 nonprofit corporation, that grew out of Executive Director Ginger Kathrens' knowledge and fear for wild horses in the West. TCF works to educate the public about the natural free-roaming behavior and social structure of wild horses and the threats to wild horse and burro society, to encourage the public to speak out for their protection on their home ranges and to support only humane management measures. Kathrens  served as the Humane Advisor on BLM’s National Wild Horse and Burro Advisory Board.

Key components of the “controversial and dangerous” cattlemen’s proposal includes:

Humane solutions preferred by AWHC, AWA, and TCF include: 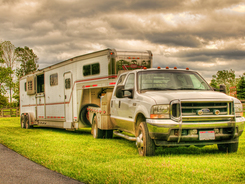