When raising foals, our goal is to optimize health and growth. This means proper and adequate nutrition and avoiding extremes that could lead to problems.

The foal’s diet is milk at first, but he soon starts nibbling grass or whatever mama is eating, mimicking her.

By a week of age he is regularly sampling what she eats—forages and/or grain. The majority of his diet, however, will be milk for the first three months.

Foals grow fastest during their first three months, but there’s usually not a lot we need to do in terms of feeding the foal except to pay attention to what the mare is eating and make sure she is properly fed.

We don’t want her gaining or losing too much weight during lactation.  She provides nutrients to the foal with her milk, supplying what he needs during this time of swift growth, so you don’t want her losing weight in her effort to feed him.

It’s not necessary to supplement the foal during the first three months unless the mare isn’t providing adequate milk, but make sure the foal doesn’t eat too much of mom’s feed if she’s being given a lot of concentrates.

Some foals may be eating a significant amount of the mare’s feed by the time they are three months old. This can lead to rapid growth, which may in turn lead to developmental problems.

After about three months, however, you can start adding some creep feed to the foal’s diet if needed. This should be something that is fairly high in protein—somewhere between 16 and 18%.  The foal needs a high-quality protein with the right balance of amino acids.

What you feed a foal should be highly digestible with the right balance of carbohydrates—not too much starch--while containing some digestible fiber and a little fat.

Starting foals on creep feeds can help them adjust to life after weaning. The forages (green pasture while they are out with their mothers) help them develop adequate populations of fiber-digesting bacteria in the gut, but the concentrate also has an influence on the microbiota and production of digestive enzymes.

If the foal already has forage and concentrate in the diet, when he’s weaned and no longer has mom’s milk, there won’t be such an abrupt change in the microbes in his gut, which makes that transition easier. The GI tract is already primed for digesting concentrates, and the foal already knows how to eat this feed.

He also needs high quality forages. In addition to pasture, he may need a good quality grass hay or an alfalfa-grass mix.

The better the forage quality, the more calories the foal will get from what he consumes, and the less excess bulk will be maintained in the digestive tract.

Feeding good digestible fiber is one way to keep a foal from getting the typical pot-bellied look of many weanlings.

Age at weaning will make some difference in what you feed. Some foals must be weaned earlier than others, for various reasons—such as the mare becoming too thin, or not providing enough milk, or giving too much milk and putting the foal at risk for developmental problems.

When weaned at 4 months or younger, addition of a milk-based creep feed is advisable.

The goal when feeding any foal is to maintain steady growth. You don’t want erratic growth and compensatory spurts. Too-rapid growth often occurs after a slowdown in growth rate--which may be due to weaning or illness or inadequate nutrition at some point.

Then when the foal gets better (if he was sick) or adjusts to weaning or has opportunity to eat more again, there’s usually a growth spurt to make up for the slowdown.

That’s when the skeletal system is most vulnerable to orthopedic problems, so you want to keep a smooth growth rate without those spurts.

Try to provide the proper amount of calories for steady growth. If foals receive too many calories they may get too fat, which is not healthy for the skeletal system, and increases the chance of developmental orthopedic disease. You want to maintain moderate body condition and steady growth.

A foal’s genetics determine how big the foal will be.  You can feed and push a foal that genetically isn’t predetermined to be big, and he won’t become big. That foal will probably just become fat.

It doesn’t really matter if a foal is below or above the average for his age and breed, as long as the growth rate is consistent and follows that curve.

If you see a deviation, however, like growth rate falling off, take a closer look at that foal to see if there is something wrong.

If you see a growth spurt, evaluate the diet and make adjustments if the foal is getting too much feed.

To make sure the foal is maintaining desired moderate steady growth you can do monthly measurements and see if there are deviations—such as spurts or falling off in growth rate.  Measure both height and weight.

You might have a foal with steady growth in weight but not in height, which means he’s getting fatter instead of taller, or a foal with the opposite problem—getting very tall but thin and not gaining proper weight. It’s important to look at both height and weight.

Remember that grass is the best forage for foals.  A recent study showed foals that were out on pasture 24/7 had significantly lower incidence of osteochondrosis than foals that were raised spending 100% of their time confined in stalls or stalls with turnout.

The diet must contain the proper building blocks for the growing foal, especially for the bones, at that age. If a foal is experiencing rapid compensatory growth or has a severe case of physitis, you need to cut back just on calories rather than all the other elements of diet.

Cutting the calories will slow the too-rapid growth, but the foal will still be growing—and needs the right amount of protein, minerals and vitamins for developing strong bones.

A foal suffering from a severe case of physitis, for example, might need to be cut back to just a ration balancer and some good quality grass hay, rather than large amounts of concentrates.

The ration balancer would contain the necessary protein (amino acids), minerals and vitamins essential to health and proper growth, without adding a lot of calories that would fuel more rapid growth. 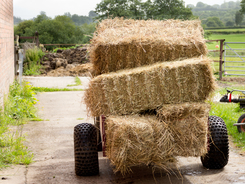 Deciding Which Hay or Forage Is Best for Your Horse

Oats and Oat Hay for Your Horse

An Illustrated Guide to Body Scoring Your Horse

Pros and Cons of Feeding Grain Hays to Your Horse