Fillies usually attain sexual maturity at 12 to 15 months of age, but some reach puberty as early as 9 to 10 months and others as late as 18 months. Estrus, or heat, which is the period of the reproductive cycle when the mare ovulates and can conceive, is governed by rather complex hormonal effects.

Mare owners can attest to the influence of female hormones as the filly reaches maturity.

When the mare reaches puberty, the pituitary gland releases the hormone FSH (follicle-stimulating hormone) which causes egg follicles within the ovary to grow and produce increasing amounts of estrogen. This estrogen prepares the reproductive tract for mating and fertilization and is also responsible for behavioral changes.

When the egg follicle approaches maturity, the pituitary releases a second hormone, LH (lutinizing hormone) that causes the follicle to ovulate. This usually occurs about 24 hours before the end of heat.

Although most stallions begin to produce sperm as early as 12 to 14 months, most are at least 15 months or older before they can successfully breed. Few stallions are used at stud before two years of age and most stallions acquire full reproductive capacity at around three years of age.

This is not to say that a younger stallion is incapable of breeding earlier than an age of 12 months, and care must be taken to separate young stallions from fillies or mares before they reach sexual maturity to prevent unwanted pregnancies

A maturing stallion's increase in testosterone produces an animal with the potential to breed and also to be dangerous to handle.

The stallion has two testicles enclosed by the scrotum and located in the prepubic area. The testicles produce the sperm and also the male hormone testosterone. The scrotum protects and regulates the temperature of the testes which are usually several degrees cooler than the stallion's body temperature because higher temperatures decrease spermatozoa production.

In a two to three year old stallion, the scrotal width is smaller than in a full grown stallion and the daily sperm output is smaller with fewer reserves. For this reason most stallions under three years of age are considered sexually immature.

Sperm production is also influenced by season, and production increases as daylight increases beginning in March and usually peaking in May. Production then begins declining and by August. has declined drastically. 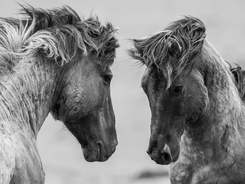 Parturition: The Birth of the Foal