An allergen microchip can be used to identify allergic sensitization in horses. "Our best friends are more like us than we perhaps thought – even in terms of their immune system," explains lead author of an important study. 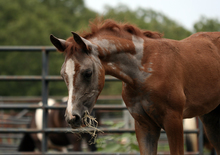 A horse with allergies?

An allergen microchip developed at the Medical University of Vienna is being used to identify allergic sensitization in horses.
© 2017 by Sharon Morris New window.

An allergen microchip developed at the Medical University of Vienna is being used to identify allergic sensitization in horses. In an international study published in leading journal "Allergy." "Our best friends are more like us than we perhaps thought -- even in terms of their immune system," explains lead author of the study, Erika Jensen-Jarolim.

The study done at the Medical University of Vienna showed that horses develop an antibody reaction by producing immunoglobulin E similar to the IgE profile in humans. IgE is an antibody primarily intended to defend against parasites but it is also responsible for allergies and is an important biomarker for the early detection of allergies.

In the case of horses, a single drop of blood is enough to test for allergies using the allergen microchip.

The international study consortium headed up by Jensen-Jarolim, also comprising researchers from Germany, Switzerland and Japan, was able to identify a strong IgE immune system reaction, particularly to buckwheat but also to alder pollen and Bermuda grass which is becoming increasingly widespread in Austria.

"Buckwheat is often used as a high-protein pseudo-cereal in horse treats and horse muesli," explains Jensen-Jarolim.

"The reaction to pollen from flat-leaved Bermuda grass, in particular, is explained by the fact that, when horses are grazing, they have their noses right down to the ground. In collaboration with Uwe Berger and his team from MedUni Vienna's Pollen Monitoring Service, we now intend to investigate the flora found in paddocks."

A clinical investigation to ascertain whether and to what extent allergens are linked to the allergic reactions commonly found in horses, such as coughs, colic and skin problems indicating the direction to take in further diagnostic investigations shows that The allergen chip is already being successfully used for diagnosing allergies in humans and is now available for horses as well.

Once diagnosed affected horses can then be put on an elimination diet that totally avoids any suspected allergens to see whether their symptoms improve. 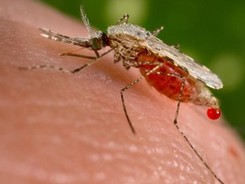 ColiCare™ Provides Peace of Mind When It Matters Most

Quality of Life for the Overweight, Insulin-Resistant Horse