Despite a long-standing belief that laminitis is a spring-time disease, a recent study identified that there is no ‘safe’ season: laminitis remains a threat regardless of the time of year. The same study (1) also revealed that 1 in 10 horses/ponies develop laminitis every year.

Horses grazing in a fall pasture

A recent study identified that there is no 'safe' season for horses: laminitis remains a threat regardless of the time of year.
© 2017 by Lubos Chlubny

As horse owners, we must remain cautious and not reduce preventive measures when the perceived spring ‘high-risk’ period is over. Furthermore, the study highlights the importance of recognizing subtle signs of potentially life-threatening episodes.

This is supported by 2017 study published in the BEVA Equine Veterinary Journal which revealed 45% of owners did not suspect laminitis was the problem prior to veterinary diagnosis, making it critical to recognize the more subtle signs.

In addition, research by Rossdales Veterinary Hospital and the Animal Health Trust (3)  in Newmarket warned that commonly cited clinical signs, such as the classic ‘laminitis stance’ and divergent growth rings, were found in less than half of the active laminitis cases in their study.

What To Look For?

Evidence suggests there is a period where laminitis is present and causing changes to the hooves, but lameness is not yet apparent. Picking up these early signs of laminitis before there is any pain associated with the condition would allow horse owners to adjust their management strategies and their veterinarian to treat the underlying disease to help prevent a painful episode of laminitis.

If you suspect laminitis:

While you wait for the veterinarian, remove your horse from pasture, provide soft footing for them to stand on and make sure they have water and hay within reach.

Prevention is better than cure…especially when there is no cure!

Feeding remains key to reduce the risk of laminitis. Modern grass varieties are generally productive grasses, too rich for horses, especially those susceptible to laminitis which is closely linked to obesity.

Access to grass should be restricted, but they still need plenty of fiber to avoid other problems such as gastric ulcers and colic. While most cases of laminitis have an underlying hormonal cause, their diet certainly contributes, usually in the form of excess sugar (aka: water soluble carbohydrates (WSC) and starch, the main sources of which are grass and cereals.

If too much sugar and starch is consumed at one time, it overloads the small intestine and accumulates in the hind gut instead.

The digestion of the sugar and starch by the hind gut bacteria produces stronger acids than would be produced by fiber digestion (the hind gut’s usual job). This results in acidosis causing bacteria to die and release toxins which can enter the bloodstream via the leaky gut wall caused by the acidity.

This is thought to trigger a series of reactions that result in damaging enzymes. These enzymes destroy the bond between the pedal bone and the hoof capsule which ultimately can result in pedal bone rotation and euthanasia is then about the only option.

Consider supplementing at least part pasture with hay. This can be fed outside on a dirt area so the horse still gets to spend time outside as well as in the stable. The recommended sugar level of hay for those at risk of laminitis is 10% sugar, so it’s best to choose a lower grade hay and get it tested to determine its nutrient content.

It’s not always possible to find a suitable hay and you can’t tell just by looking at it, hence the importance of having it tested. Most feed companies offer this service as do independent nutritionists.

It’s common practice to soak hay for horses with laminitis. While this is effective for leaching sugars – and most other nutrients – from the hay, it has many drawbacks.

Soaking increases the bacterial content, reducing the hygienic quality; it produces an environmental pollutant (the brown yucky water left in the bucket); and results in an unpalatable, soggy hay that can sour in summer temperatures and freeze in the winter. It’s also a huge hassle!

High-temperature hay steaming is also an option. Haygain’s patented method improves the hygienic quality of hay by killing bacteria, mold and fungal spores as well as reducing airborne respirable dust by up to 99%.

Another benefit of steaming over soaking is that it retains hay’s nutrients, except for a variable loss in water soluble carbohydrates that are crucial to laminitis prevention. The amount of WSC reduction by steaming varies based on the type of hay, and time and location of harvest.

Once you’ve had your hay tested and you know the starting WSC content, you may find you only need to reduce the sugar (WSC) by a small amount. The recommended overall content is 10% or 100g WSC/kg DM, so a single hay steaming is typically sufficient to reach that level if the original WSC content is only slightly higher.

The benefit of this steam-only scenario is maintaining the hay’s nutrients, including protein and minerals, while reducing the WSC to safe levels.

However, if your hay has a high sugar content, then you will need to leach more WSC and it’s best to use a combination of soaking and steaming. This means you will have the benefit of the clean steamed hay but with the nutritional value leached out more by the soaking phase.

Research has labelled the gold standard treatment as a 9-hour soak followed by a 50-minute steam cycle. In the study, soaking plus steaming reduced the WSC contents of all hays down to the recommended level of 100g WSC/kg DM (Harris et al., 2017) for fat horses and those pre-disposed to laminitis.

The steaming after soaking further reduced the WSC content and killed any bacteria that had multiplied during the soaking process, thus improving the hygienic quality of the hay.

Be aware of the risks of laminitis to horses and ponies at all times, manage their weight and diet with it in mind. Be vigilant of any signs of hoof changes and hoof pain no matter how subtle and seek veterinary advise as soon as you suspect laminitis.

1. “Incidence and clinical signs of owner‐reported equine laminitis in a cohort of horses and ponies in Great Britain,” BEVA Equine Veterinary Journal, Dec. 2018

Author Becky James, BSc, MSc, was instrumental in developing Haygain’s patented high temperature steaming while studying at the Royal Agricultural University in Cirencester, England. She joined Haygain in 2008 and is now the company’s Director, Technical Sales. 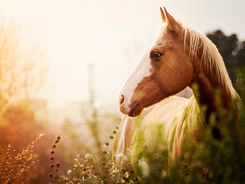 "Tis the Season for Allergies to Make a Horse's Life Miserable

Just a Number: How to Manage Your Aging Horse for Happy, …

Horse Owners Urged To Be Vigilant for Signs of Equine …