Minerals have direct and indirect involvement in virtually every action in the body, and have important effects on Insulin Resistance (IR) or its consequences. IR is different in the horse than in the human, but the same basic principles apply. There is evidence of activated antioxidant defenses in the tissues of IR horses.

It’s not as fancy as a pricey magic bullet supplement but the best place to start supporting your IR horse on a low-sugar and -starch diet is with balanced intake of key minerals
© 2017 by WEBT New window.

Building the horse’s own antioxidant basic defenses is most effective. This includes the superoxide dismutase (SOD), catalase, and glutathione peroxidase enzyme systems, as well as the antioxidants glutathione, CoQ10, carotenoids and vitamin A, flavanoids, and vitamins E and C. Glutathione is particularly widely distributed.

SOD absolutely requires copper and zinc. Catalase requires iron, which is not an issue, as the typical equine diet supplies plenty of iron.

Glutathione activity depends on Selenium, a very common deficiency. Selenium is also essential for the generation of the active form of thyroid hormone, T3, from T4. Selenoproteins, important to immune function, are just beginning to be looked at in depth. Both IR and pituitary pars intermedia dysfunction (PPID) horses are prone to inflammatory and allergic-type immune reactions rather than using the more sophisticated arm of the immune system.

Zinc is a commonly deficient mineral. Low serum Zinc is associated with IR and type 2 diabetes in humans and rats. Supplementation of Zinc supports defenses against type 2 diabetes in rat models; exactly why has not been determined. It is known that Zinc is important on several levels, involved in insulin release and sensitivity, as well as being an antioxidant in SOD.

Like Zinc, Copper is critical for SOD function. Copper deficiency causes IR and fatty liver in rats. Low liver Copper is found in human fatty livers. Deficiency is also linked to higher liver iron in IR, a known problem in IR horses, too.

Magnesium has been associated with IR for 40 years, with hundreds of human papers dedicated to the subject. Magnesium is not a treatment, but by correcting a deficiency it makes the disease easier to control.

Magnesium dietary intake and magnesium status – whole body levels – are both associated with strong defenses against IR and they deteriorate when someone develops IR. It becomes a cycle you need to stay on top of to allow stabilization.

A 2013 study included almost 2000 non-diabetic subjects followed for 15.6 years.1 Magnesium intake was a “significant protective factor” against type 2 diabetes, including progression from IR to diabetes. Researchers could predict who would most likely become IR by looking at their magnesium levels.

Iodine is essential to production of thyroid hormone. Low iodine status has been identified in human patients with type 2 diabetes. Normal thyroid function is required for insulin sensitivity.

IR horses may also have low thyroid hormone levels in some cases. This is probably euthyroid sick syndrome, meaning it is an effect rather than a cause. In most of these horses, with correct levels of Selenium and Iodine, and control of IR, the levels will rise again. Low thyroid is not a primary part of the syndrome but can make some horses very depressed and lethargic. Thyroid supplementation can be used but by addressing the above you will not need supplementation long term.

Chromium has been important for people, probably due to processed foods being stripped of many essential minerals. It is required for a normal cellular response to insulin. The exact dietary requirement is unknown, but supplementation in IR horses is not helpful in most cases. Grass absorbs chromium very efficiently and soil levels are abundant in most areas. The ECIR Group has observed a problem only when horses are eating hay grown on alkaline soils where the plants may not absorb the chromium as readily.

It’s not as fancy as a pricey magic bullet supplement but the best place to start supporting your IR horse on a low-sugar and -starch diet is with balanced intake of key minerals.

Started in 1999, the ECIR Group is the largest field-trial database for PPID and EMS in the world and provides the latest research, diagnosis, and treatment information, in addition to dietary recommendations for horses with these conditions. Even universities do not and cannot compile and follow long term as many in-depth case histories of PPID/EMS horses as the ECIR Group.

THE MISSION of the ECIR Group Inc. is to improve the welfare of equines with metabolic disorders via a unique interface between basic research and real-life clinical experience. Prevention of laminitis is the ultimate goal. The ECIR Group serves the scientific community, practicing clinicians, and owners by focusing on investigations most likely to quickly, immediately, and significantly benefit the welfare of the horse. 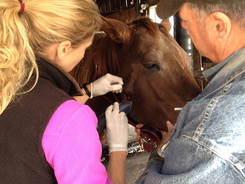 Standing Surgery in Horses: An Update

Beyond Soundness - Looking at the Bigger Picture of How My …

The History of Rotational Deworming, its Risk Today, and How …