Five methods to cool horses after exercise in hot and humid conditions were compared in a recent research study referenced in Equine Guelph's August news letter. 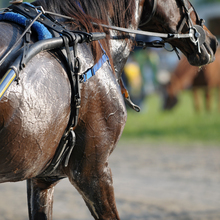 Study compared methods for cooling horses in hot, humid conditions, testing the hypothesis that continual application of running water is the most effective method to decrease core temperature.
© 2017 by Vesilvio New window.

This study compared various methods for cooling horses in such conditions, testing the hypothesis that continual application of running water would be the most effective method to decrease core temperature.

Five Thoroughbreds were exercised on a treadmill at wet-bulb globe temperature of 31.8 ± 0.1°C until their pulmonary artery temperature reached 42°C.

The time until the pulmonary artery temperature returned to <39°C (t39) and the rectal temperature at 30 minutes after the onset of cooling were compared between five cooling methods in a 5 × 5 Latin square design:

With intermittent cold water, plus scraping tended to produce longer t39 than ICW (P = .06), and both produced significantly shorter t39 than FAN and CONT (P < .001). The t39 of the FAN tended to be shorter than with the CONT (P = .06). All the cooling methods resulted in lower rectal temperatures at 30 minutes than CONT. The temperature was the lowest with the shower method, with no significant differences between the fan and intermittent cold-water methods. Continuous showering with tap water was the most effective method to decrease core temperature in horses.

Scraping off the water is not essential for cooling horses.

Research on how to best cool down an overheated horse says: 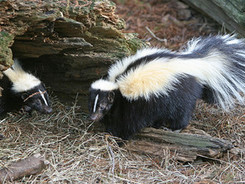 Quick Tip: The Risk of Rabies Is Real for Horses

Is Telemedicine the Answer for Horse Owners during the …