Complications associated with foaling are a significant cause of morbidity and mortality in both foals and mares. Even apparently normal births can result in significant internal and external injury to the mare. In extreme cases, these injuries can be severe and result in death or require humane euthanasia of the dam.

Healthy mare and foal in pasture

A review of diagnostic case submissions was conducted to assess equine peripartum deaths of mares that died secondary to foaling complications.
© 2016 by kyslynskaha New window.

A review of diagnostic case submissions to the University of Kentucky Veterinary Diagnostic Laboratory was conducted to assess equine peripartum deaths during the 2017 and 2018 foaling seasons. Mares that died secondary to foaling complications or were humanely euthanized due to significant parturition associated injury were included.

During the two-year period, 121 cases of peri- partum death were identified out of approximately 3,000 equine necropsy submissions. Cases were categorized into five groups (gastrointestinal, musculoskeletal, reproductive, vascular, and mis- cellaneous) based on the primary organ system associated with the cause of death.

Submissions began in December and extended into June of both years. Deaths occurred in multiple breeds, but Thoroughbreds predominated.

Fatal lesions associated with the gastrointestinal tract were most common and occurred in 52 (43%) cases.

Fatal vascular lesions accounted for 24% of peripartum deaths and included the No. 1 cause of death during the review period, rupture of the uterine artery.

Ruptures of the uterine artery were by far the most common vascular lesion (17%), frequently resulted in secondary hematoma for- mation in the broad ligament, a connective tissue structure that supports the uterus, and hemoperioneum.

Infrequent ruptures were also associated with the internal iliac artery (3%), circumiliac artery (1%), ovarian artery (1%), and aorta (1%). Two cases of broad ligament hematoma were re- corded, in which the exact location of the vascular rupture could not be determined.

Direct injury to the mare’s reproductive tract occurred in 22% of the cases and frequently resulted in humane euthanasia. Uterine tear/rupture was most frequent in this category and occurred in 12% of the cases.

Fractures were specifically associated with the pelvis, tibia, and femur and were noted to occur in mares during dystocia events, suffering post-foaling pain, and being transported to a veterinary clinic.

The miscellaneous group included four sporadic and individual cases that occurred in the peripartum time period. These cases included death or euthanasia due to uncontrollable post-dystocia pain, a presumed cardiovascular event following dystocia, an anaphylactic drug reaction, and liver disease of unknown cause.

Dystocia was specifically mentioned in the clinical history of 19% of the 121 cases. Although the accuracy of this self-reported number is not definitive, it does emphasize that many injuries during the foaling period are not associated with difficult births.

In summary, equine death associated with the foaling period is unfortunately common. The underlying causes likely include a mixture of diseases associated with birthing trauma, pain, fetal movement and positioning, and vascular changes associated with gestation. Evaluation of mares during and following parturition is essential to rapidly identify and treat this unique group of diseases. 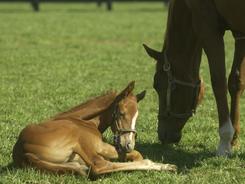 Worried about Strangles in Your Horse? New Vaccine May Be …